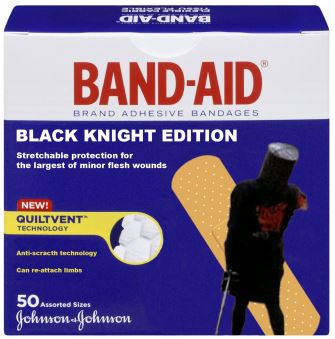 After nearly 45 years of silence, Peter Armisoff, a retired surgeon, has finally agreed to speak publicly about his most high-profile patient: The Black Knight, who we will refer to as Matt for the remainder of the article. “I think most people know about how Matt was viciously attacked and mostly dismembered by that guy who kept saying he was a King. But what they don’t know is how much effort it took for him to recover from the incident.”

According to leading experts on amputation, when done correctly, it takes approximately 4-8 weeks for the wound to heal fully. However, in the Black Knight’s case, the wound was imprecise and not properly dressed or treated for many hours.

“Matt suffered severe blood loss due to his lack of treatment. As bad as that was, the worst part was the tetanus. From what I hear, the blade he was cut with was quite rusted. Apparently, it had been stored for several years at the bottom of a lake. Well, Matt developed a severe case of tetanus. Matt’s spine fractured because of it which was not, uh…not great for him considering he already didn’t have… you know… any arms… or legs.”

Despite the multiple gruesome injuries, Armisoff says that Matt’s never let his injuries define him or dampen his spirits. “Matt has stayed really positive through this whole ordeal. If anything, he’s more embarrassed of his injuries than sad about them. In fact, when I first treated him, he kept on threatening to bite my legs off or something. I think he was just surprised that he wasn’t invincible.”

Armisoff couldn’t go into detail about the specific operations Matt underwent or their costs, though it was reported that the damages he received from Arthur Pendragon more than covered his medical bills. Pendragon of course is still serving a life sentence for attempted murder.

What the Hell is Etobicoke? »
« “Journalist” Taunted While Attempting to Interview Castle Residents