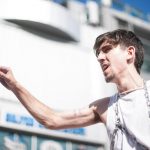 New Primate Discovered at U of T

A recent discovery by the Bri’ish scientist, Simon O’Well has led to some excitement–and utter confusion– in the scientific community earlier this week. He found that a new type of primate, ingenirous caffeinus, is able to survive for months with sleep deprivation thanks to its evolved second liver that is able to extract organic molecules […]

A longstanding world record at our illustrious institution has officially fallen. Vietnamese student Miles Nguyen has become the fastest student in history to receive a 4-year degree from the University of Toronto, completing his Specialist BA in East Asian Studies in only 2 years, 3 months, 11 days, 5 hours, 2 minutes, and 36 seconds. […]

Developers of the popular educational system University, widely used among teens and young adults, announced on Tuesday that it will now be free to play. “Our aim,” added executive Al McMater, “is to make university more relevant to its target demographic.” In order to make this possible, the developers have introduced a new range of […]