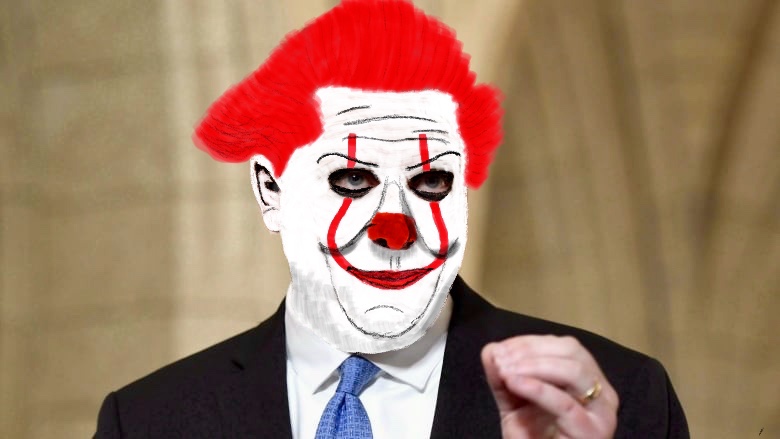 YOUNGSTOWN, ALBERTA – Early this month, Andrew Scheer continued his push to solidify support in the Western provinces as he spoke with residents of the rural communities of South-Eastern Alberta, including Youngstown, Cereal, Spondin, Big Stone and Sheerness. Despite the fact that all of these rural communities will almost certainly vote in favour of Scheer’s Conservatives in October’s Federal Election, the CPC Leader was eager to let them know how much he values their support and opinions.

Despite only needing to comment on the traditional Conservative talking points (such as reducing taxes and increasing jobs in the oil industry) that have served right-leaning candidates so well over the years in rural Alberta, Scheer couldn’t resist deviating from his party’s standard list of policy points. Sensing that his crowd was populated by a surprising number of opinionated cinephiles, Scheer’s remarks turned to the wildly popular horror film “It Chapter Two”.

“Have you guys seen the second ‘It’ movie yet,” Scheer asked his crowd in an apparent attempt to appear relatable. “The wife and I finally got around to seeing it and I have to say I quite enjoyed it. If I had one complaint, it would be that the film should really be called ‘He’ or ‘Him’, not ‘It’. I mean, Pennywise may be a shapeshifting clown demon from space who takes on the form of your worst fears regardless of that form’s gender and whose true form is a giant half-spider half-clown with no apparent genitalia of any kind, but he is definitely a man. Am I right?”

Scheer’s initial comments were met with somewhat indifferent cheers by the conservative crowd. However, the comments have since sparked controversy among more liberal Canadian voters, especially among LGBTQ activists. “Mr. Scheer’s comments show his utter contempt for everyone who doesn’t conform to his homophobic and transphobic world view,” said LGBTQ rights activist Lou Rawl. “It is clear that this man is not fit to serve as Prime Minister of our country.”

While many are concerned about the transphobic nature of the comments made by the PM hopeful, some activists just aren’t satisfied with keeping the horror movie franchise’s name the same and would like to see a change. “I think it’s just, like, so awful that we’re calling this person It,” said Stanley J. Walker from Vancouver, British Columbia. “That’s why I haven’t seen the movie. Because they treat the clown as less than human. It’s disgusting! If Pennywise identifies as non-binary, they should be saying ‘they’, NOT ‘it’.”

Stephen King declined The Toike’s multiple requests for comment regarding the controversy surrounding characters he created. At time of writing, it is unclear how these comments will impact the upcoming election.

Norm and Gourd Discuss Pumpkins and Halloween »
« “He Who Passed The Sentence, Swings the Sword.”