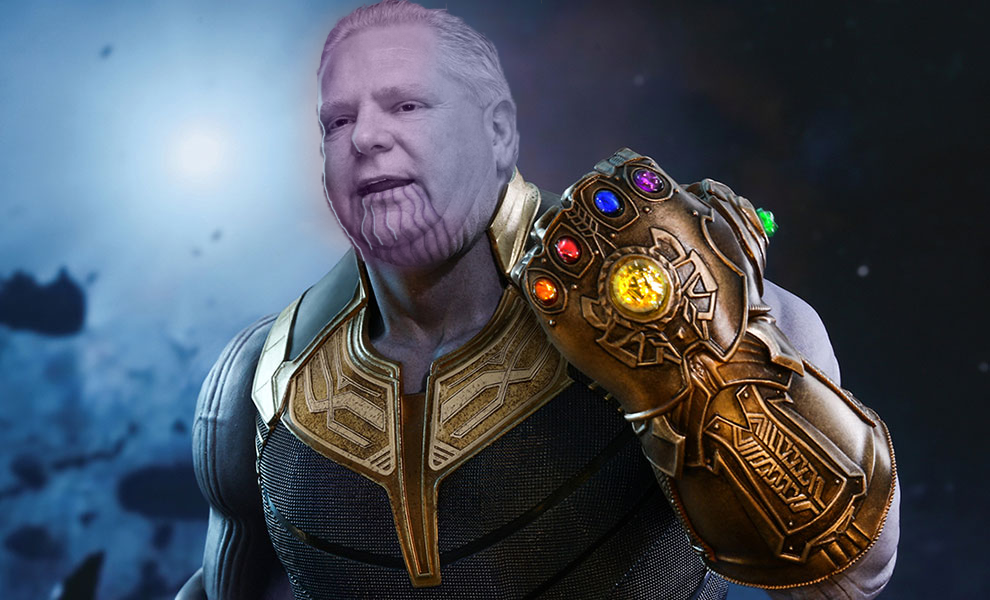 The most ambitious election event in Ontario history is over, and despite the assembled powers of a quirky team of unlikely allies, Doug Ford has succeeded in capturing 176 Infinity Ridings, giving him unlimited power over life, reality, and existence in Ontario.

Although long projected to form government, the magnitude of the majority captured by Ford, also known as the Mad Titan of Etobicoke, Dark Lord of Efficiencies, and Destroyer of Gravy Trains, surprised many. The fact that the Progressive Conservatives control more than 61% of the Legislature makes them the strongest creatures in the universe, allowing them to destroy life on a scale hitherto undreamt of. Hypothetically. And with Royal Assent, of course.

Such ramifications were thoroughly discussed by the Toike Oike’s Totally Expert Political Panel the night of the elections.

“From the dawn of the universe, there was nothing. Then…boom. The Big Bang sends 124 elemental electoral districts, hurtling across the virgin universe. These Infinity Ridings each control an essential aspect of governance,” explained Prof. “No-First-Name” Wong of the Department of Political Science.

“The entire time I knew Ford, he only ever had one goal, to bring balance to the budget by wiping out half of all spending,” explained former Ford ally Councillor Norm Kelly, who became an opponent of the new Premier through a convoluted narrative involving a sexually-charged-yet-totally-platonic relationship with Chris Pratt that never fully explains itself. “Now that he has 76 Infinity Ridings, he can do it with the snap of his fingers, like this.”

Not all panel members reacted negatively to the results though. “Hear me, and rejoice. You are about to lose your welfare checks at the hand of the children of Ford. Be thankful that your meaningless lives are now contributed to the balance,” declared Ford fan Councillor Giorgio Mammoliti, moments before being unflatteringly compared to a popular cartoon character by a randomly appearing Robert Downey, Jr.

Regardless of the initial shock, the elections are over, and the Progressive Conservative government was officially sworn-in on the 29th of June. In his inauguration speech delivered on the steps of Queen’s Park, Ford described his plan for the province, and why the hardest choices require the strongest wills.

“We are living in an era marked by unprecedented change, great upheavals, and economic instability, and following years of fiscal mismanagement, record levels of debt, and crippling interest payments, crumbling infrastructure, and a broken health-care system. Needless to say, the task before us is truly immense,” declared Ford while visibly melting in the 42 degree humidex. “My friendly folksy friend-folks, it’s a simple calculus. This universe is finite, its resources … finite. If life is left unchecked, life will cease to exist. It needs correcting my friendly folks.”

Addressing his spotty political experience of a single city council term and a failed bid for mayor, Ford had this to say: “My folksy friendly folk-friends, I know what it’s like to lose. To feel so desperately that you’re right, yet to fail nonetheless. This feeling, it turns the legs to jelly. I ask you, to what end? Dread it. Run from it. Destiny arrives all the same. And now, it’s here. Or should I say: I AM, my folksy friends.”

Concluding his speech, Ford remarked that, “Fun is not something one considers when balancing the budget, but this does bring a smile to my face,” in what analysts say was an incredibly powerful line that somehow didn’t make it into the broadcasted version of the speech.

Also announced on the 29th were Ford’s picks for the new Cabinet. Hopes are high among the newly-minted ministers about the future of the government. “The first thing we need to do is open the books and the first thing Premier Ford did was announce the end of the cap-and-trade tax in Ontario; I think that’s a fabulous start,” said incoming Finance Minister Vic Fedeli. On the topic of forthcoming government spending plans, Fedeli had this to say: “The budget is perfectly balanced, as all things should be.”

While Ford can finally rest, and watch the Sun rise on a grateful Ontario, the contentious election season resulted in mixed success for the other political parties of the province.

“Mr. Trudeau, I don’t feel so good,” said a rapidly-disintegrating Ontario Liberal Party while being cradled by its bizarrely-attractive-middle-aged-role-model-who-knows-deep-down-that-he-bears-some-responsibility-for-this-outcome-and-is-laden-with-guilt.

New Democratic Leader Andrea Horwath, whose party was elevated to Official Opposition status with 40 seats, had some choice words for Premier Ford. “Let’s talk about this plan of yours. I think it’s good, except it sucks. So let me do the plan and that way it might be really good.”