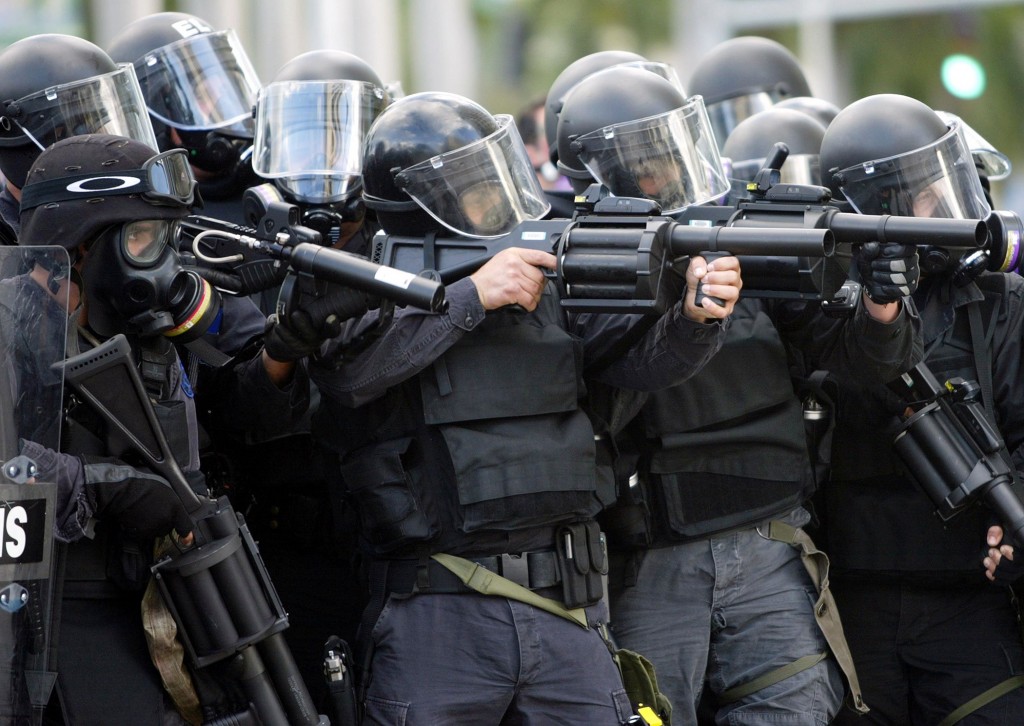 TORONTO – What started as a peaceful assembly of law-enforcement officers downtown devolved into chaos as hostile civilians attempted to break up the demonstration.

“We had just gotten some new riot gear and decided to get everyone out wearing it, to see what it looked like, if it fit, that sort of thing,” said Constable Jessica Harding. “We had a professional photographer come out to take some pictures in front of the station, to use for our office’s Christmas cards, but as he started taking the first pictures we could see people getting curious about what was going on. After a few minutes they started to try to get in the way of the camera, and when we told them to leave they started acting hostile. At least three of them called us pigs, which was just completely unfair.”

Within minutes a handful of people had turned into an angry mob and College Street was packed with protesters.

“You can imagine how nervous we were to be facing all these angry people, and we were wearing brand new equipment!” Harding continued. “We weren’t exactly eager to get it scuffed up. I would have preferred to use it in a controlled training exercise with coworkers. At least then you know the weirdo you’re up against.”

After an hour several people in the crowd spontaneously produced megaphones and began verbally abusing the officers. Witnesses reported a wide range of anti-police expletives including “donut munchers” and “ticket monkeys”, though the majority of which were unfit for printing.

“It’s been very upsetting for us,” said Toronto Police Chief Norm Crichton. “I mean, sure, we eat donuts and coffee, but so do a lot of other people. It’s not all we do, either. I know one officer who drinks tea. I think it’s hardly appropriate for these people to be making snap judgements based on the colour of our uniforms.”

“When you’re on a megaphone in a crowd, people look at you as an authority figure,” he continued, “and in the wrong hands that megaphone can become a weapon. It is clear to me that until we have stronger legislation to prevent maniacs from using these weapons our officers need to be better equipped.”

The police did manage to subdue the crowd in short order, with a few gentle taps of their nightsticks and just three reported cases of friendly pepper-spraying. Chief Crichton was unable to comment on any arrests or charges to be laid against the protesters, but added that a self-esteem workshop and counseling services would be available for verbal assault victims, and that the Commissioners are considering adding de-sensitivity courses to the officers’ training regimen.