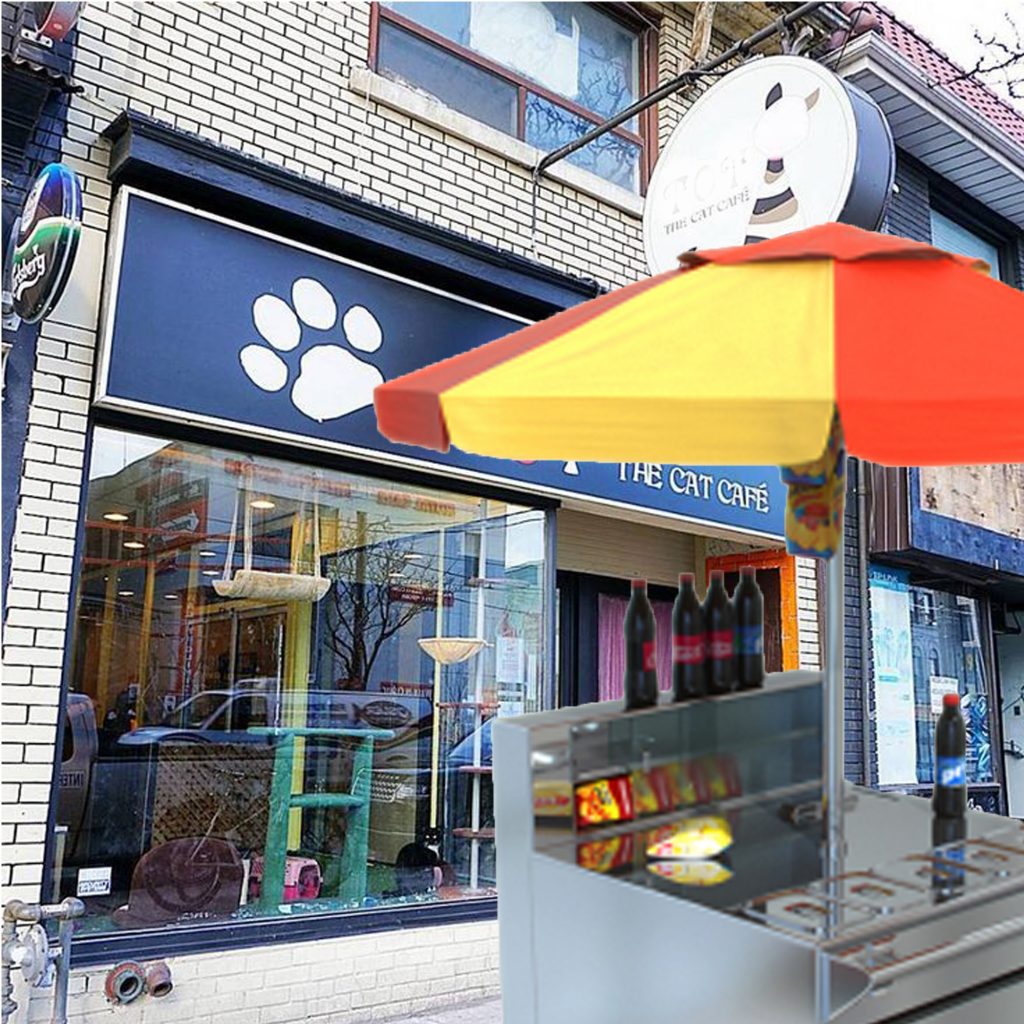 Travellers along College Street have recently found themselves feeling mildly uncomfortable and vaguely concerned since the arrival of a brand new gourmet hot dog stand outside a local cat cafe. The feline-themed establishment known as Bot the Cat Cafe was recently joined in its position just West of Spaydina by a vending cart which claims to be a purrveyor of only the finest in street meat.

Locals have expressed uncertainty about the legitimacy of the new vendor, but none were able to clarify their exact concerns. Eisen Klauss, a clerk at a shop across the street, claims there’s “something fishy” about the stand that he can’t quite put his finger on. “I’m not sure why, but this feels weird,” says nearby resident Kitty Hairington, as she stands staring at the cart, munching on one of its products.

When responding to questions from The Toike Oike, the attendant at the stand and a barista within the cafe both gave a hearty chuckle and commented on the amusing irony of selling dogs in front of a place with cats. After adjusting their respective collars and wiping the perfectly normal midday perspiration from their foreheads, both noted how many great jokes have come up since the stand opened.

“It’s no surprise at all that people are talking about it,” stated the barista. “A lot of folks get nervous when they encounter businesses in close proximity with contrasting names or menus. That’s clearly what’s happening.” This was followed by assuring nods from all the smiling staff in the establishment.

Back out on the sidewalk, the Toike volunteered the above explanation to Miss Hairington. “Huh,” she responded, setting her jaw and squinting even harder at the classy fur trim on the awning of the cart. “I guess that… could be it.” She then coughed slightly while tossing out the leftover napkin from the Perfectly Average Double Normal Cheese and Industry Standard Chili DOOOOOG she had just finished.

Other menu items include the Just Your Regular Classic Hot Dog, and the Gourmet Nothing-to-See-Here Sausage on a Bun.

After a thorough investigation, this Toike Oike ace reporter has concluded that there is nothing really suspicious about the new hot dog stand on College. The numerous perturbed glances and anxious pace-quickening from pedestrians and drivers on the street are can be explained by either freak coincidence or a public lack of appreciation for dramatic irony. Management at the new vending cart claims the venture has been fairly successful thus far, and that they are considering new franchising opportunities in front of the Toronto Humane Society and the U of T Medical Sciences Building.

It Wasn’t Just a Rumour: Leaks Confirm Development of Super Mario 65 »
« The Need for PC