The Launch of Uber Celery

Ride sharing Juggernaut Uber has recently revealed plans for the new off-shoot from their main app, and they’re calling it: Uber Celery. “Uber celery is going to change the way you think abou celery” says Uber CEO Data Khosrowshahi. “There’s an imbalance in the world between the people who have celery, and the people who want it. Uber celery will allow the brave and misguided people who purchase an entire bushel of doomed-to-go-bad celery to share that celery with their community” he continues. Critics have praised Uber Celery as being the Uber of Celery, and the app has been thus far well received by devout Uber customers and celery fanatics alike.

Some people are concerned about the safety of Uber Celery however, and prefer the old fashion way of sharing celery. Crotchety old man with an iPhone 6, Guy Oldé, had this to say about the celery sharing sensation: “It’s just not right. What happened to the days when celery vendors had to be certified, and worked out of a centralized government-approved office? Back in my day it meant something to be a celery vendor, but kids these days are never going to know what it’s like having to go down to the store and pick out your own outrageously large bundle of celery that will most definitely go bad before you’ve used it all. ” Uber has reached out to reassure us, that while everyone is welcome to join the celery sharing app and start sharing their celery, all celery undergoes strict vetting to make sure it meets Uber standards and regulations. 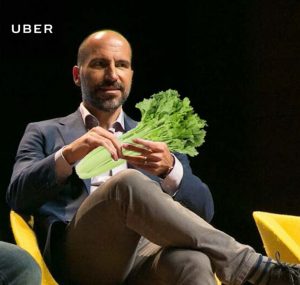